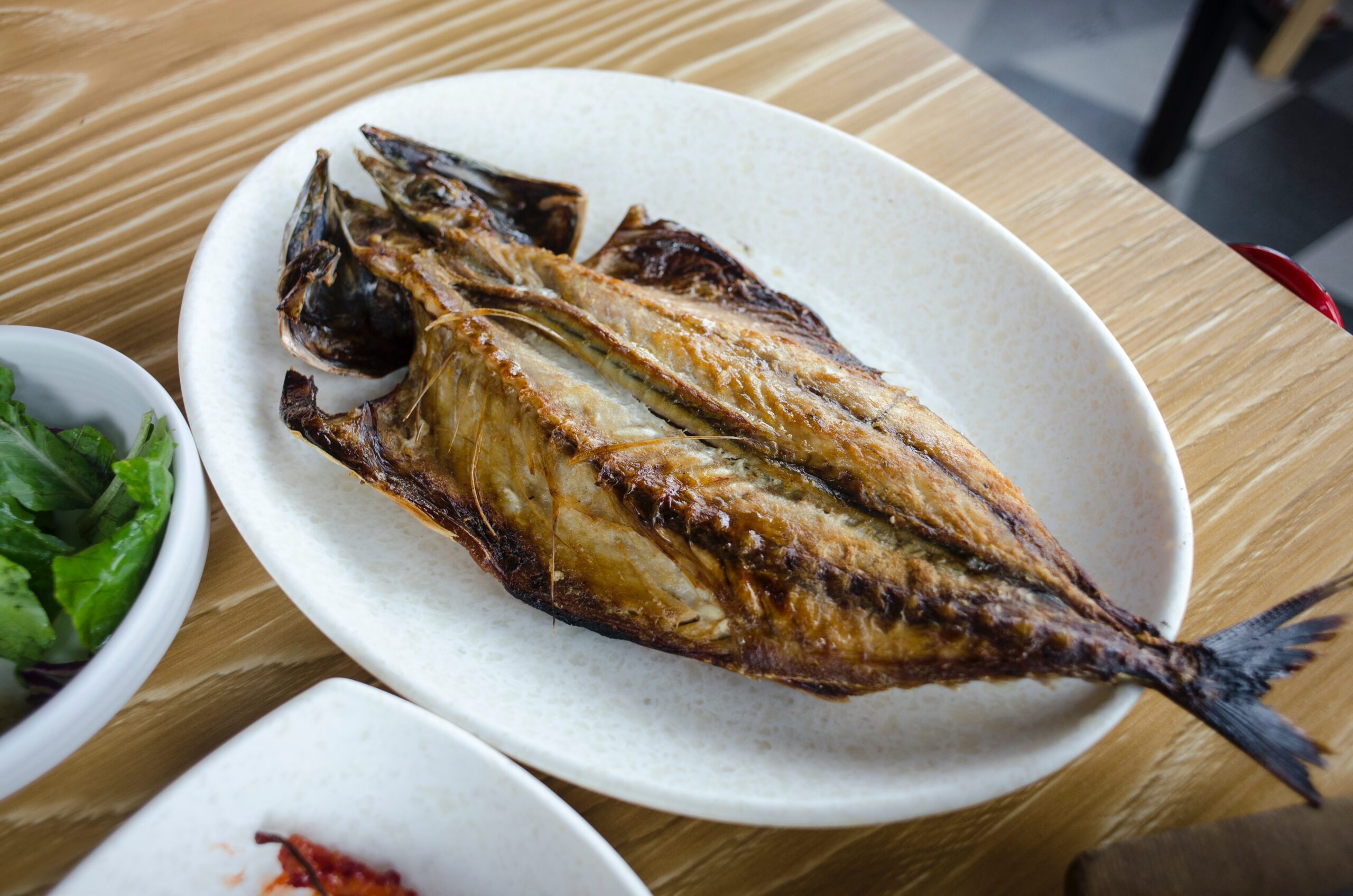 Dogs love the smell of fish but can dogs eat fish bones? This is a common question asked by pet owners. You may not know if your dog ate fish bones beforehand because dogs are familiar with bones. Fish bones are also dangerous and cause problems for dogs.

Two things will happen if your dog eats fish bones; they will be fine or in a dangerous situation

Although not all dogs will react after eating fish bones, it would be better if you are aware to prevent the possibility of harm to your dog.

Contact your veterinarian immediately if strange symptoms occur in your dog after consuming fish bones.

If My Dog Ate Fish Bones, What Should I Do?

Several things can measure how dangerous fish bones are, such as how big your dog is and how big the fish bone is. So you have to pay attention to it.

It probably wouldn’t matter if a big dog swallowed a small fish bone because the bones didn’t match its body.

But it’s different if a small dog eats a big bone. This is quite dangerous.

If you find out your dog ate fish bones, then all you can do is wait for your dog’s reaction.

If you see a strange reaction in your dog, don’t take too long. Quickly take your dog to the nearest vet to find out its condition.

If My Dog Ate Fish Bone, What Shouldn’t I Do?

First, push the dog’s nape so the fish bones can regurgitate.

If your dog swallows large and long bones, this can be dangerous because it can injure the dog’s digestive organs. You can still overcome it, but you must help your dog cough so the bones can come out.

Fish bones are dangerous if they enter the digestive organs. There will be a lousy chance if your dog eats fish bones, so you should take precautions so that it doesn’t happen to your favorite furry animal.

Dogs feel attracted to fish bones because there is still meat attached to the fish bones. Fish bones are sharp objects, so you have to keep them away from dogs.

What Will Happen If My Dog Swallows A Fish Bone?

Fish bones are the enemy of dogs because the components of fish bones are sharp, small, and able to scratch anything soft.

When your dog starts to swallow fish bones, it may feel like choking on its throat.

If this happens to small puppies or dogs, they will have difficulty breathing because of the bone stuck in the esophagus. They have a relatively small size of esophagus.

Fish bones are best swallowed if your dog’s esophagus is large. And then, it will go into the stomach and intestines. However, it may have a more harmful effect while it’s inside the organs.

A blockage is the worst possible thing for your dog if they eat fish bones because fish bones have a long and jagged size.

Fish bones can cause blockage because they will get stuck in the dog’s organs and the pad of the esophagus causes difficulty eating. And if it’s blocking the end organs, such as the intestines, your dog will have trouble removing feces.

If your dog is experiencing these symptoms, it may not require medical treatment. However, it may have to undergo surgery to remove the fish bones if condition is severe.

This infection causes inflammation of the thin lining of the abdominal cavity called the peritoneum. The disease due to condition is called peritonitis.

Peritonitis is a dangerous disease. And don’t let your dog experience this.

Strange behavior, such as its attitude when walking and lying down. If someone touches its stomach, it will react in pain. Check immediately to avoid making it worse.

If you have noticed these symptoms in your dog after it’s swallowed a fishbone, then immediately contact your nearest veterinarian.

After eating fish bones, reactions in dogs do not immediately experience visible symptoms. But only react after a few minutes or hours later. The pain depends on the position of the fish bones.

When the fish bone has passed through the esophagus and into the stomach, a new pain will usually appear, and the symptoms are visible.

The sharp fishbones of some dogs may be able to digest it because of their strong tooth pattern, but some dogs can’t.

After your dog swallows the fishbone and you know it, keep it out of the way, and you have to keep an eye on it until your dog feels better.

If you observe your dog’s movements and notice any strange symptoms, then immediately take your dog to the vet.

The most common symptom of an infected dog is fever.

This happens because the dog’s body has to raise its temperature because of the bacteria in its body that it must fight.

Diseases due to infection after your dog ate fish bones are more familiar with peritonitis. Maybe the temperature will suddenly rise so you should check it often.

The following symptom when your dog feels uncomfortable and wants to remove fish bones stuck in its throat or internal organs is vomiting. Previously your dog would cough because it touched something painful in its body.

After you see your dog vomit its stomach contents, you should immediately check whether the fish bones are out. But it would be better if you immediately took it to the vet for fear that there might be injuries caused by scratches that could be dangerous.

The appearance of blood symptoms is usually in the dog’s vomit or feces. This occurs because the dog’s stomach or digestive organs are scratched, causing injuries.

Blood in the dog’s vomit or feces is usually apparent, but sometimes it’s just a faint dark brown color.

Suppose your dog has symptoms of vomiting blood. Don’t hesitate to take your dog veterinary.

Symptoms of an unhealthy dog’s gums will usually appear paler than their original color or white.

Although only pale gums, there is a dangerous disease whose initial symptoms are like this.

Pale gums are usually due to bleeding in the dog’s internal organs due to scratches from sharp objects such as fish bones. This can lead to infection and kidney failure.

Usually, when you want to check your dog’s gums, they will rebel, making it difficult for you, but you can change by examining the inner eyelid.

Dogs are animals with a big appetite, so when your dog’s appetite suddenly decreases, something must be bothering your dog. And you can check it right away

When something is stuck in the dog’s throat, it will make your dog feel sick when swallowing food so that their appetite is reduced.

These symptoms are like gastrointestinal occlusion, resulting in dehydration, anemia, and even fainting. So you should pay more attention to your dog.

When your ordinarily playful and cheerful dog suddenly looks lethargic and lies there, you should suspect it. If it reacts strangely, the stomach may be cramping. You have to understand that and be able to handle it.

Even if your dog has a stomach ache from eating fish bones the day after, you should not ignore it because it is difficult to detect disease in your dog’s stomach. It can be pretty dangerous. So immediately take the vet.

Better not, you can replace it with another bone that is not sharp and small because the shape of fish bones is harmful to the dog’s digestive organs and can cause disease due to infection.

Make sure your dog does not even eat fish bones. And don’t be careless after eating fish, throwing fish bones carelessly. Maybe your dog can smell it and eat it right away. So can dogs eat fish bones? The answer is no, they shouldn’t.

If this happens, you, as the owner, must be more vigilant and responsible for keeping your dog away from sharp objects.